Perception: Free Wi-Fi should be part of the benefits of staying at higher priced hotels.

Reality: Hotel companies offer free Wi-Fi [Wireless Fidelity?] at lower-cost properties because those hotels are generally newer which means the infrastructure was built to accommodate wireless access. They also usually have fewer rooms, so bandwidth needs are smaller.

A Wall Street Journal article examines how and why those policies are changing. Article is copied at end of post.

It is one of those mysterious—and maddening—quirks of modern travel: Cheap hotels usually give guests free Wi-Fi in their rooms, while pricey spots often charge for it.

But a growing number of hotel companies are making free, high-speed Internet access more available, even at luxury hotels. They are starting out by extending complimentary Wi-Fi to certain members of their loyalty programs.

High-speed Internet access “is like water these days. You would never expect to go to a hotel that didn’t have sufficient water pressure,” says Josh Weiss, vice president, brands and guest technology for Hilton Worldwide. “High-speed Internet has gone from being a novelty to being a basic expectation in just a few years.”

Holders of American Express Platinum and Centurion cards get free Wi-Fi when booking a room at almost half of the properties included in the charge-card company’s Fine Hotels & Resorts program.

Hotel companies say they tend to offer free Wi-Fi at lower-cost properties because those hotels are generally newer and the infrastructure is easier to build. They also usually have fewer rooms, so bandwidth needs are smaller.

Hyatt Hotels Corp., for example, offers free high-speed Internet access at its new Andaz boutique brand, Hyatt Summerfield Suites and Hyatt Place properties, where the average nightly rate is about $96. It generally charges anywhere from about $9.95 to $14.95 a day for Wi-Fi at many of its more luxurious Hyatt Regency, Grand Hyatt and Park Hyatt hotels.

Hyatt says it was the first big hotel company to extend complimentary Wi-Fi to loyalty-program members when it made the move in April 2009. Currently, platinum and diamond members of its Gold Passport program receive free in-room Internet access. (Travelers can attain platinum status after five separate stays or a total of 15 nights completed in a year.)

Some high-end hotel companies say their high-speed Internet access is worth paying for. Mandarin Oriental Hotel Group says its minimum standard for guest use is speedier than what other hotels offer and comes with on-site technical support.

“We offer Wi-Fi with a level of personal service,” said Monika Nerger, vice president of technology, the Americas, in an emailed statement. Mandarin charges about $15 a day for high-speed access.

“It is not uncommon for one guest room to consume more bandwidth than an entire hotel did three years ago,” says Hilton’s Mr. Weiss.

But here’s a warning to data junkies: Hilton has individual user caps. Bandwidth hogs who go over the cap “will see a slowdown,” he says.

Write to Andrea Petersen at andrea.petersen@wsj.com 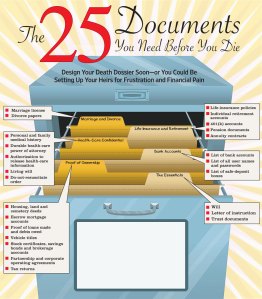 The financial consequences of not having your documents in order can be significant.

Over $30 billion in unclaimed assets lie dormant with state treasurers. Most experts recommend creating a comprehensive folder of documents that one's family can access in case of emergency.

I have a workable and deeply unoriginal idea to help your family do just that. That idea involves breaking the project into various steps with just enough accountability built-in to the process.

Please email me for more information.

Error: Twitter did not respond. Please wait a few minutes and refresh this page.